How To Step Into The Spotlight In Your Business 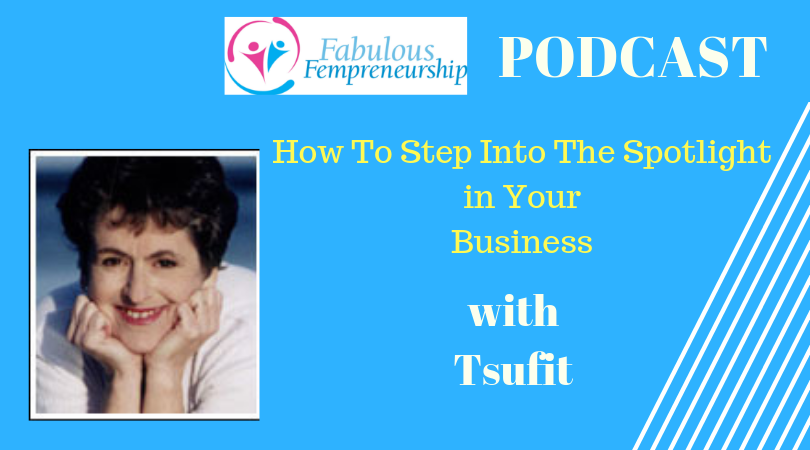 Free for all listeners: 11 Free Tips on How to Stand Out When You Open Your Mouth to Introduce Yourself at  www.SpotlightSecrets.com

The Toronto Star, Canada’s highest circulating newspaper, described Tsufit as “a starburst of energy – bright bubbly and upbeat.” Publisher’s Weekly described her as a “ coaching dynamo.”

The author of Step Into The Spotlight!, Tsufit coaches keynote speakers, CEOs, trainers, authors, performers and entrepreneurs on how to “knock em dead” in the spotlight and how to catapult their brand into a starring role on the business stage.

A singer, television actress and comedienne and the subject of hundreds of feature newspaper articles and television and radio appearances internationally, Tsufit has appeared doing stand-up comedy in night clubs and on national TV, appeared on television and film commercials internationally and was a regular as the comedically evil cafeteria lady in the national TV show System Crash for four seasons. And yes, that’s her dancing under a Carmen Miranda headdress of tomatoes in an East Side Mario’s commercial!

Tsufit is a Dean’s List graduate from University of Toronto Law School and was once named a “Super-achiever” by Canadian Lawyer magazine. Her music CD, Under the Mediterranean Sky, has made Top Album lists all over North America and is played on the radio internationally.

Tsufit’s unique story was the subject of a national television documentary which has aired on several networks across Canada. Tsufit is a popular guest on national television shows and is in demand as a keynote speaker, radio guest, coach, workshop facilitator and mom (although she is not currently taking on any new clients in the last category!).

To view all our podcasts for women entrepreneurs, click here